Meet our September Cowboy of the Month who is all about brotherhood, wine, and the girl who got away…

If your best friends had to pick four words to describe you, what would they pick?

Strong-willed. (Some might say stubborn, but I like to put a positive spin on things.) Thrill-seeking. Loyal as hell. A fighter.

What are you passionate about?

Living life by own rules and not letting anyone set limits on what I can and cannot do.

Riding a bronc or bull—whatever I need to do to train for the next competition.

What are three things you enjoy doing in your free time?

Spending time with my brothers, our Aunt Jenna who raised us, and Jenna’s chicken, Lucy—who is not psychic, by the way. Riding. Always riding.

What’s the last song you listened to?

Mighta been “American Kids,” by Kenny Chesney. Gets me thinking about line dancing and—there I go again, doing what I shouldn’t be doing.

My favorite book is Laura Hillenbrand’s Seabiscuit. I don’t race horses, but I ride ‘em. I understand ‘em. And there’s nothing better than an underdog story.

If you could go back in time and change one thing in your life, what would it be?

There are lots of things I’d want to change but would be powerless to do so—things that happened when I was just a kid. But the one thing I could change—that I should have done differently—was everything that happened on that night years ago when I met Lily Green.

What are you looking for in an ideal mate?

Someone who drives me so crazy I can’t tell if I love her or hate her.

Someone who isn’t afraid to let her guard down and let me see the real her.

Someone who can step out onto a country bar dance floor and dance with abandon.

Someone who can scrounge up ingredients from my kitchen I didn’t even know I had and bake the best damned cookies a man has ever tasted—while wearing nothing but a pair of oven mitts.

An excerpt from TOUGH LUCK COWBOY…

Jack raised a brow, and Luke suddenly relaxed. For once he and his brother seemed to have a common goal.

“On three,” he whispered, then mouthed the numbers to his brother.

The two of them charged Walker, and the youngest Everett brother wasn’t fast enough to dodge their blows.

Luke’s brush stroked across Walker’s face while Jack’s roller made sure the front of Walker’s black T-shirt wasn’t so black anymore.

Walker stood there, stock-still for several long seconds as he took his brothers’ torment without a complaint. But Luke could see it—the slow heave of his chest and the eerie calm in his eyes. Walker Everett would not go down quietly.

Before Jack had a chance to react, Walker’s boot swiped his oldest brother’s foot out from under him, and the man was flat on his back in seconds.

“Shit!” Luke swore. “Are you goddamn crazy?” he asked a chuckling Walker.

“What?” He shrugged. “I made sure to kick his good leg out from under him. I’m not a monster.”

It was then that they heard the laughter—Jack’s laughter—coming at them from the floor below. Their mistake was looking down. Jack still had his brush in hand and had managed to reach into the paint tray to reload.

When their heads dipped, a spray of wet paint hit them both—first Walker and then Luke—straight in the face.

“What in the hell is going on in here?”

All three of them spun to where the small alcove opened into the rest of the winery. Luke squinted through only one open eye, the other squeezed shut to ward off the dripping paint.

There Ava stood, hands on hips, with a bakery bag on the floor at her feet.

She raised a brow. “I picked you up some cookies and muffins, figuring you’d want to break for a snack.” She pointed toward her fiancé, who still lay on the floor with his paint-filled brush pointed at his brothers. “While I was hoping for some sort of brotherly bonding, I expected you to be the voice of reason.”

Luke swiped his forearm across his face, then slowly blinked open his closed eye, grateful the paint hadn’t sealed it shut or blinded him.

Jack tried to school his features into that of the calm, controlled patriarch, the role he’d asserted himself into the second their father had sought solace at the bottom of a whiskey bottle. But for the first time in years, Luke saw the big brother he remembered from before their mother had died—before they lost Jack Senior to his abusive grief.

Jack dropped his head back to the floor and laughed hard. Luke spared a glance at Walker who, although a mess of splattered paint, was not the mess he always saw him as. He knew Jack worried too about Walker sharing too much of their father’s DNA—mainly the tendency toward the bottle. But this morning he was simply their asshole little brother. And despite everything—especially the shit they were certainly in with Ava—the corners of Luke’s mouth turned up, and he laughed.

Soon all three of them were a chorus of laughter. And possibly a few snorts. When he snuck a glance at Ava, who hadn’t said another word, all he saw was her shaking her head—and fighting her own smile. 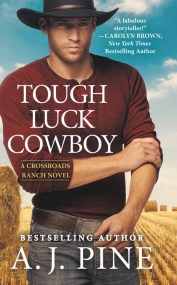 What's the saying, bad luck comes in threes? If so, Lily Green is due for something good. First, her divorce is finalized---on her birthday, no less. Then the first job she lands for her catering company turns out to be for her ex-husband's wedding. To top it off, she's stuck working the event with Luke Everett, the sexy-as-hell best man who's never been able to stand her. When can a girl catch a break?

For years, Luke has kept his feelings for Lily safely hidden. Hitting on his best friend's ex-wife would definitely break the cowboy code of honor. But ever since an injury sidelined his rodeo riding, the two of them keep getting thrown together. It's only a matter of time until his true feelings come to light. When that happens, it will either be the biggest mistake of his life, or a sign that his luck is about to change.